The Single Window For Customs – Will International Experience Help Ukraine? 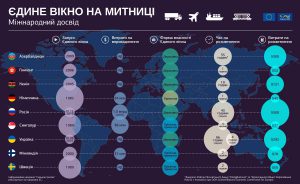 The Single Window for Customs is to be officially launched in Ukraine on August 1. How will international experience help Ukraine to effectively implement this successful world practice?

The Single Window is one of the world’s most efficient electronic data exchange systems at customs during import-export operations or transit (customs, sanitary-epidemiological, veterinary-sanitary, phytosanitary, environmental, radiological, and other types of control). Finally, this world practice will be implemented in Ukraine. Thus, the Resolution of the Cabinet of Ministers No 364 obliges all relevant structures to work through the newly created electronic system of the Single Window from August 1.

Initially, the procedure for coordinating the actions of customs and control bodies will be introduced in a “test mode” and will operate only in individual customs offices. However, the adoption and entry into force of this Resolution will give the next impetus to the development of the Single Window system and will help to reveal specific issues and problems that need to be addressed further.

Why is it so important for Ukraine? Because it will help reduce the number of processes, simplify various procedures and minimize the human factor during the passage of goods through customs. Accordingly, the Single Window for Ukraine is, first of all, the creation of conditions for transparent work and the elimination of corruption at customs.

But is it possible to implement the Single Window quickly and efficiently without spending lots of resources, and not turning it into another unfulfilled promise? World experience gives a positive answer to this question.

In general, there are many models that can be used to implement the Single Window.

The most striking example of the early introduction of the Single Window is Singapore. The state has enjoyed the benefits of this system for decades and is known to be very successful, occupying some of the leading positions in global rankings. Introduced in Singapore, the Single Window became the world’s first national electronic trade document management system.

Back in the mid-1980s, the Singaporean authorities decided to make the international trade licensing base more efficient and to secure Singapore’s status as one of the global trade centers. The result was the creation of the Singapore TradeNet System which connected several government agencies in 1989.

In 2007, a public-private partnership was established to develop and implement a new TradeXchange system based on the existing one. It has become a new neutral and secure platform that facilitates the exchange of logistics and commercial information and provides additional services for supply chain management, documentation, trade finance, and insurance. The system usage is paid and is based on a monthly fee and a transaction fee. Currently, 10 minutes after submitting the documents for permits, traders receive an electronic positive or negative response describing the conditions for obtaining a permit or a detailed reason for refusal.

100% of trade declarations are processed electronically through the system. About 9 million applications for trade permits (30,000 per day) are processed annually.

In Germany, the Single Window system has been operating successfully since 1982. The implementation started from the attempt to make the work of the port in Hamburg more efficient. Thus, in 1982, a pilot project was launched, which later grew into an existing system. It is managed and owned by a private company, which is divided between the shareholders into three parts: one third belongs to the berth operators, one third belongs to shipping agents and shipping companies and the last third belongs to freight forwarders.

Use of the system is mandatory only for dangerous goods and export goods subject to customs control. The main users of the system are mainly freight forwarders, warehousing and logistics companies, and departments of industrial and manufacturing firms.

Customers pay a fee for using the system. They are provided with an individual code and password, and the data they provide is received only by the specified recipient if he is registered in the system.

One of the biggest achievements is a critical reduction in paperwork due to the standardization process and a significant reduction in data retyping, which saves a lot of time. In the future, it is planned to attract more importers and exporters to the system, implement the system outside the country, improve services and develop new value-added services (as it is still operated by a commercial company), and better monitor business processes.

One of the recent examples is Finland. The Finnish government started implementing the Single Window PortNet system in the 1990s. After nearly a decade of detailed planning, program code writing, and testing, maritime trade relocated to the Single Window in 2000. PortNet is indeed a multifunctional single system for users who deliver goods by sea. Since its launch, PortNet has drastically reduced the need to fill in and process paper forms. Today, more than 99% of all forms of customs clearance of ship cargo to and from Finland are processed through the Single Window.

EU legislation has significantly influenced the legal structure of the Single Window system in this country. For example, EU directives on data privacy and electronic keys have been largely implemented in Finnish law, but only after adapting to the country’s realities.

The main lesson of Finland’s success in the functioning of the Single Window is that an effective system can be created with relatively little effort and in a modern form with state support and existing political will.

The Kenyan city of Mombasa is one of the busiest ports in Africa. The Single Window system was first introduced here in 2005, spreading to the whole country by 2007. Kenya’s Single Window electronic system operates on all of the country’s transport systems – road, rail, air, and sea. The main task was to reduce the time of customs clearance of goods from 10 to 3 days in ports; from 5 to 1 day at airports; from 2 days to 1 hour for vehicles. This was planned to be achieved through the transition to electronic document management and the fight against corruption.

Innovations in this area are very important for Kenya, as more than 50% of GDP comes from international trade. At the moment, the implementation of the system is underway. In the future, it is planned to unite all 5 countries of the East African Partnership into a single system of the Single Electronic Window.

We will see in the near future which way Ukraine will choose to implement the Single Window and whether it will join the club of countries promoting international trade.