Results of implementation of the Association Agreement, 2014 – 1st half of 2016 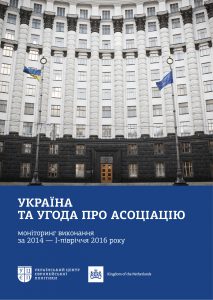 The Association Agreement provides for Ukraine’s obligations to implement around 350 European legislation acts (directives, regulations, decisions) by 2025. The report presents an assessment of the progress made in adapting Ukrainian legislation to EU requirements and adhering to the official terms of the Agreement.

In accordance with the terms set out in the Agreement, for the period from 2014 to the first half of 2016, Ukraine had to adapt 15 EU acts in the spheres of energy, transport, environment, and public health. Ukraine also had to approve a separate programme document – A Comprehensive Strategy for Implementing Legislation in the Field of Sanitary and Phytosanitary Measures.

During the reporting period, Ukraine began to fulfill its commitments in all the above areas, but with different speeds, efficiency, and specificity. But so far no commitment has been fulfilled. Most of them have been partially implemented or the relevant draft laws are still under consideration in the Verkhovna Rada of Ukraine.

At the same time, the monitoring of Ukraine’s legislative commitments under the Association Agreement showed that in 4 areas within the Deep and Comprehensive Free Trade Area (DCFTA), there is an advance of official deadlines, namely: public procurement, transparency of extractive industries, technical regulation and sanitary and phytosanitary measures. Officially, implementation of these commitments has been planned since the entry into force of the DCFTA (January 1, 2016), but Ukraine began to implement them in 2014. Framework legislation was adopted in the field of food safety, standardization, metrology, and technical regulation. Adaptation of public procurement legislation has contributed to the introduction of a progressive electronic public procurement system in Ukraine ProZorro.

Energy. The greatest progress has been made in the gas sector, while changes in the electricity and energy efficiency sectors are fragmentary and lag far behind the schedule set by Ukraine’s commitments to the Energy Community.

National legislation regulating the gas market has been largely adapted to the requirements of the EU’s 3rd Energy Package since the adoption of the Framework Law of Ukraine No 502250 “On the Natural Gas Market”. The vast majority of secondary legislation necessary for real gas reform has also been adopted. At the same time, full implementation of European norms will take place only after the adoption of legislation regulating ownership in the segment of gas distribution networks, the creation of an independent market regulator, and the completion of the division of Naftogaz.

Adaptation of legislation in the field of energy efficiency began in reverse order: a number of secondary legislation was adopted in the absence of a basic framework law. Thus, one of the draft laws “On Energy Efficiency” is still under development in the Cabinet of Ministers, and the other “On Energy Efficiency of Buildings” has been under consideration in the Verkhovna Rada for more than a year and is now returned to the government for revision.

Public health. Implementation of commitments in this area is slow and, at some stages, formal. Orders developed by the Ministry of Health in the field of infectious diseases have been adapted to outdated directives. Also, in the process of adapting the legislation, no changes are made to the current legislation, which in the future will cause problems with the implementation of adopted acts. The EU recommendation on the establishment of a Public Health Center has only been formally implemented, as in practice the Center has not yet started its work.

Environment. Ukraine must fulfill one commitment regarding the protection of wild birds. The process of its adaptation, namely Art. 4.2 of the Directive, is very slow. Ukraine has started the process of creating the Emerald Network on the territories of existing reserves, but this has nothing to do with the implementation of the Directive, as Art. 4.2 requires the creation of special “bird reservations” for birds throughout Ukraine at the legislative level with a special regime for the protection of these reserves.

The analysis of program commitments showed that Ukraine complied with the relevant requirement and adopted on February 24, 2016, a comprehensive strategy for the implementation of legislation in the field of sanitary and phytosanitary measures. However, the process is not yet complete, as the Strategy is being agreed upon with the European Commission.

Recommendations. In order to effectively implement the Association Agreement and adapt national legislation to EU legislation, it is recommended to develop and implement a mechanism for the accelerated passage of draft laws aimed at implementing the Agreement. For example, it is possible to introduce a separate session day procedure for voting on European integration laws or to set a clear time for this during each session day.

DOWNLOAD “Ukraine and the Association Agreement: Implementation Monitoring, 2014 – 1st half of 2016”